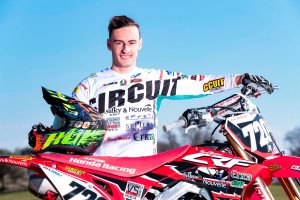 This year (2019) Pierre will compete for the team Honda Assomotor in the European Championship EMX250.